There are a few essential items every vehicle should have stored inside. A spare tire, a USB car charger, and your vehicle’s registration are a good start, but you might not get anywhere without Tacklife’s 1200A Portable Car Jump Starter (KP120). It allows you to jump start your vehicle’s battery all on your own, and today you can snag one for only $43.98 at Amazon when clip the coupon on its product page and enter promo code EE89MCPJ during checkout. That saves you $36 off its regular cost there, though the real savings come later when this jump starter gets your vehicle back on the road. Shipping is free, though you’d receive your order even faster with Amazon Prime. 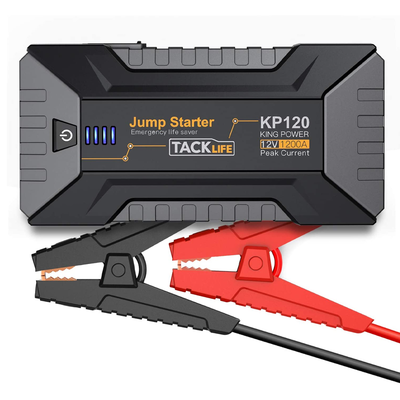 
Packing for your summer road trip won’t be complete without ensuring you can jump-start your vehicle’s battery in a pinch. This 1200A peak model is suitable for up to 8L gas or 6L diesel engines. Use the 5% on-page coupon and the below code to save.

Tacklife’s jump starter works with vehicles with up to an 8L gas engine or 6L diesel engine. It will give you multiple jump starts before needing to be recharged itself, and when the time comes, you can power it back up using your car’s cigarette lighter outlet or plug it into a regular outlet inside your home with its included chargers. It’s capable of holding a charge for about a year while stored in your vehicle.

It’s compact and small enough to hold in your hand while its intelligent protection circuitry inside keeps it safe from short-circuiting, over-charging, over-heating, and more. It also features a built-in USB-C port with Quick Charge 3.0 that allows you to charge your phone, tablet, or another device with its internal battery. There’s an integrated LED flashlight as well which features three lighting modes (Standard, SOS, and Strobe).

If you’re stranded on the side of the road, you’ll be thankful to have this sidekick in your vehicle. While you’re at it, check out our list of the best travel accessories for even more essentials you should bring along on your next trip.

Review: Persona 4 Golden has a great story, but dated mechanics


Fans have been clamoring for Atlus to release its Persona games on the Switch, but the developer instead opted to bring the series outside of the PlayStation ecosystem for the first time with the Steam release of Persona 4 Golden. While the JRPG classic’s story and characters still shine, the visuals and mechanics show their age.


Even though E3 was cancelled this year, several media outlets like PC Gamer and GamesRadar, are showcasing several upcoming video games. Here’s a list of all the games from the PC Gaming Show.


Microsoft Teams has seen quite a surge of growth with more people working from home, and Microsoft continues to bring new features to the platform. The latest include a couple of meeting features for free users, along with the option to set a custom background of your choosing in meetings.

We rounded up our favorite podcast apps for Windows 10


There are podcasts that cover every subject under the sun, but how do you organize them? There are plenty of podcast apps on Windows 10, but these six are the very best.