Xiaomi might have brought some hype to the affordable television industry in India over the last couple of years, but Indian television brand Vu has been selling affordable TVs since long before the Chinese company even made its entry into India. Vu typically offers big-screen, feature-filled televisions at affordable prices, giving traditional brands such as Sony, Samsung, and LG a run for their money.

Vu’s range of products varies greatly in price, starting at under Rs. 20,000 and going up to Rs. 8,00,000 for the 100-inch Vu 100 Super TV. Today, we’re reviewing a product closer to the low end of that range – the new Vu Ultra Android Smart TV 43GA. Priced at Rs. 22,999, this 43-inch full-HD smart television runs Android TV and promises value for money. It targets the size and performance that most television buyers in India would be happy with. Here’s our review of the new Vu television.

We’re used to seeing fancy designs on high-end televisions, but the budget segment largely sticks to the basics. The Vu Ultra Android Smart TV keeps things simple when it comes to design; there’s nothing that stands out here. The borders around the screen aren’t slim but aren’t too wide either, with only a Vu logo at the bottom. The television isn’t particularly slim itself, with a wide curved back that is quite thick towards the bottom – if you have it wall-mounted, this TV will stick out a fair bit even with a low-profile mount. However, these measurements are entirely acceptable given the price.

The box contains table stands as well as a wall-mount kit for the Vu Ultra Android Smart TV. The wall-mount kit is different from what you get on most TVs, with its own mechanism. However, you can attach a standard VESA wall mount instead, which is what we did when setting this TV up for review. The four-point table stands attach near the corners of the TV, so you’ll need a table that’s almost as wide as the TV itself to place it on.

The back of the TV is plastic and quite ordinary to look at. Most of the ports are on the left side, with only the AV In sockets facing backwards. The thick back means that access to the ports is easy even when the TV is wall mounted. You get two HDMI ports (three would have been ideal), two USB ports, Ethernet, Headphone Out, Antenna, and Digital Audio Out. One of the HDMI ports is ARC compatible, so you have plenty of options to connect external audio devices. The TV does of course also have Wi-Fi for wireless connectivity to the Internet.

The Vu Ultra Android Smart TV 43GA has a 43-inch full-HD screen and supports the Dolby Audio and DTS sound formats. The TV weighs just 7.1kg, making it easy to set up or move around yourself, if needed.

We’re used to seeing modern Bluetooth remotes even with affordable TVs, but Vu has kept things simple here. The Vu Ultra Android Smart TV has a standard infrared remote that needs to be pointed at the TV to work, reminding us of simpler times. The lack of Bluetooth also means there’s no voice command support, which is a bit of a letdown. However, the remote looks decent enough and is built well.

It has buttons for pretty much anything you’d need, including hotkeys for Google Play, YouTube, Netflix, Amazon Prime Video, and Hotstar. There are also easy playback controls, a button to quickly access media on connected USB devices, a proper number pad and a D-pad for navigation, and quick access buttons for switching between sound and picture modes. We liked how easy it was to access most important functions on the TV through a short sequence of button presses on the remote.

The Vu Ultra Android Smart TV has built-in Chromecast functionality, like other Android TV devices, and also supports Bluetooth 5 for pairing with other devices. HDMI-CEC is supported, and we were able to properly use the Vu remote with an Amazon Fire TV Stick 4K that we had connected to the television during our review. 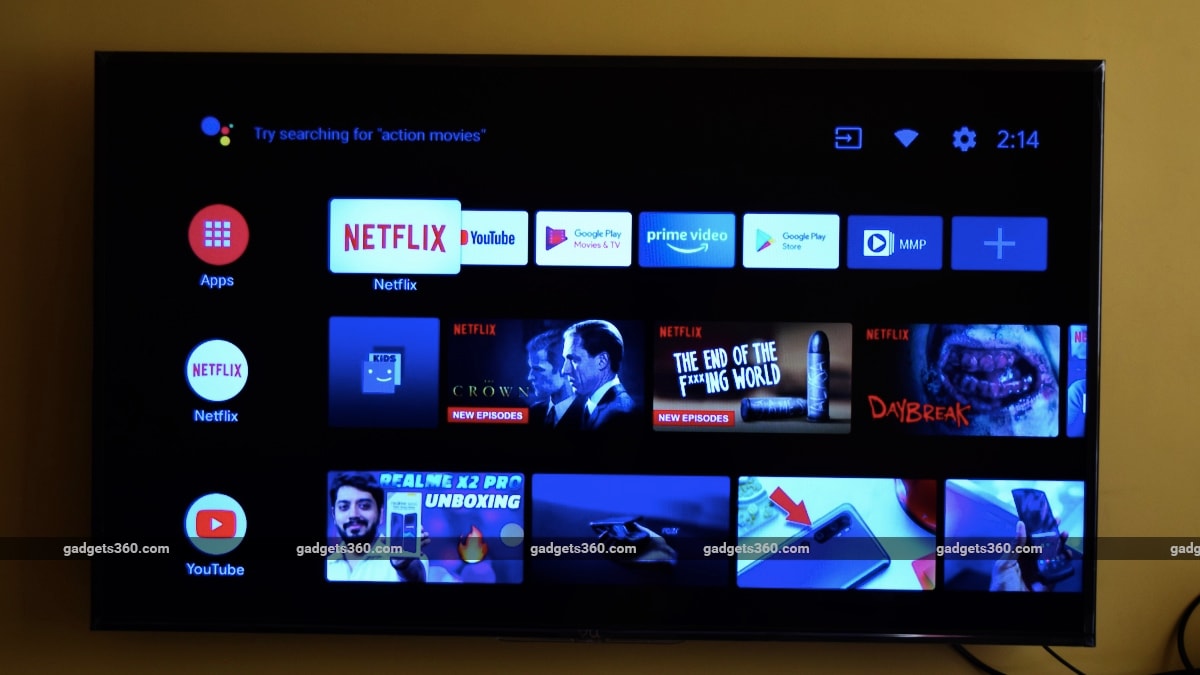 The television runs on the Android TV platform

While some manufacturers such as Samsung and LG have their own smart TV platforms, many brands find it easier to go with Android TV. The Vu Ultra Android Smart TV runs on stock Android TV 9 Pie with no additions to the core experience, which we appreciated. It provided a familiar experience and we were quickly able to find our way around. We also liked the Chromecast-powered screensavers.

Interestingly, the TV interface has a Google Assistant button, but it isn’t possible to use this since neither the TV nor the remote have microphones. Even if the TV lets you think it’s ready for a command, you can’t use this. You can, or course, use Google Assistant on other devices in your home (such as a Google Home smart speaker), and they will communicate with the TV assuming both are signed in to the same Google account.

While most of the TV’s settings are controlled through the Android TV interface, certain controls work through an overlay which you can call up using the remote. This leads to the Android TV settings, and so it’s possible to change most settings even if you’re in the middle of watching something.

Some problems with logging on to Amazon Prime Video on the Vu Ultra Android Smart TV have been reported through reviews on the device’s Amazon.in product listing, but we were able to log on after resetting the TV once. Netflix and YouTube worked as expected. All streaming services on the smart TV platform support video streaming at up to full-HD.

Most useful apps are available to download through the Google Play Store, with no significant omissions. We did sometimes find the responsiveness of the TV while navigating its interface to be slow, but usually we had no trouble with getting around the UI. Fortunately, booting was quick when the TV was in standby, taking less than five seconds and resuming with the last-used source. A full restart (that is, when the main power is switched off) took a while, similar to what we’ve seen on other Android TV devices. 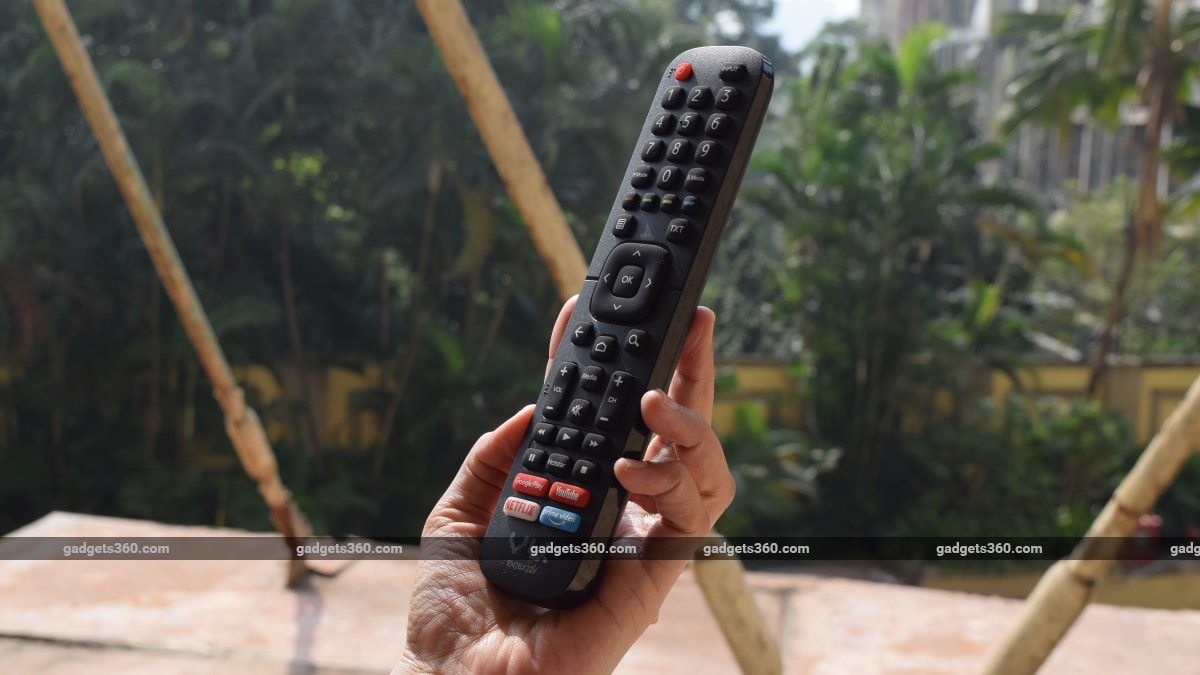 The Vu Ultra Android Smart TV series sticks to the basics in terms of features too. The 43GA variant has a full-HD resolution and only supports standard dynamic range content, which is enough for most people who would be watching cable or DTH television plus some streaming video. We used various streaming services and some of our own high-quality test files for the review, with an Amazon Fire TV Stick and the TV’s own apps.

Starting with full-HD content, we watched The Spy on Netflix. Performance was decent for the most part, although colours seemed to be ever so slightly inaccurate. Skin tones had a red tinge, while other scenes in this 1960s-era spy thriller also tended to look like they had a slight splash of sepia. We did like the sharpness, which was excellent given the 43-inch full-HD screen of the 43GA variant, and our viewing distance.

We were also impressed with motion, as was visible in various episodes of Our Planet and Love, Death and Robots. Even during particularly shaky documentary-style scenes of The Office, we were quite impressed with how the Vu Ultra Android Smart TV handled motion.

Blacks were a bit on the dull side, but we were satisfied with how they looked given the price of this TV. We did, however, have issues with contrast levels; whites often appeared too bright and tended to wash over other shades, which negatively affected sharpness and detail in the picture. This TV is capable of getting very bright and colours can be vibrant, but we found that green elements on screen looked a bit too bright and glowing for our liking.

Moving to lower-resolution content, we found that performance with 720p and standard definition videos was pretty good across various genres. We watched a bunch of YouTube videos and streamed NDTV news through apps on the Amazon Fire TV Stick, and found that motion quality and sharpness were decent even with the relatively low resolution and the upscaling required.

Coming to sound quality, we experienced a bit of unevenness in the audio levels. While the TV can get loud, we found that we needed to turn the volume up quite high to get some sense of uniformity in the sound. The Vu Ultra Android Smart TV sounded somewhat decent with the volume turned up, but lower volumes often meant we couldn’t clearly hear dialogue. 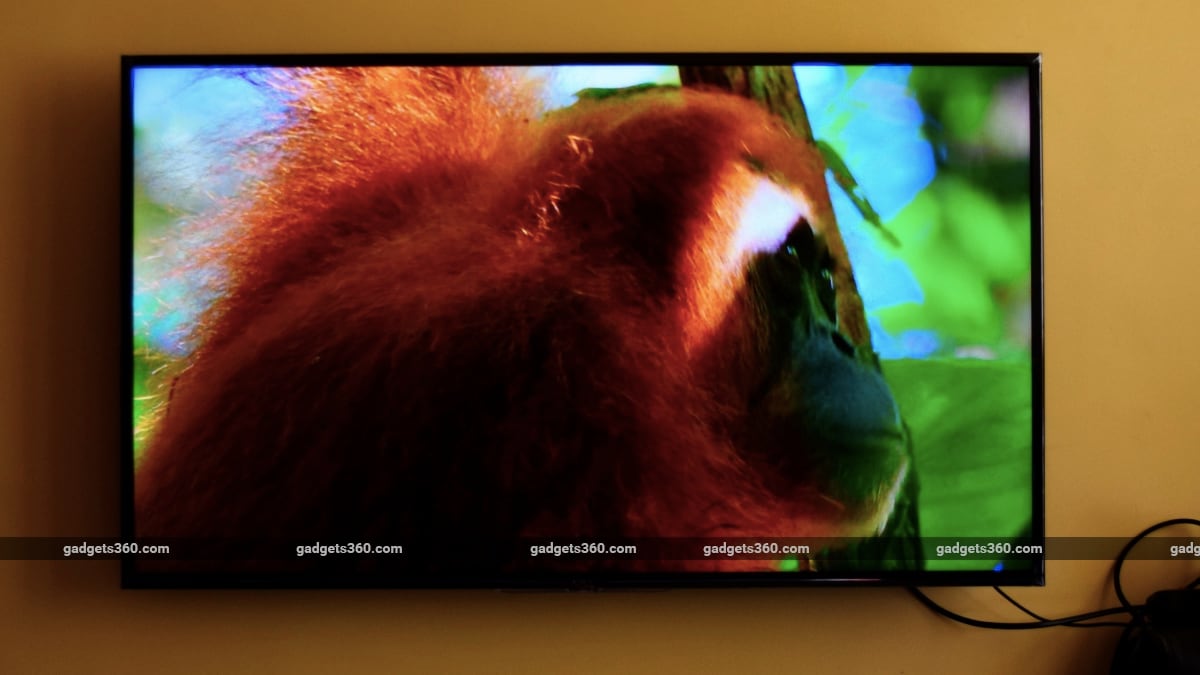 Affordable televisions usually have many caveats that you would have to live with, and the Vu Ultra Android Smart TV is no different. This television isn’t perfect – colours can sometimes be a bit awkward, contrast is iffy, and sound is inconsistent and uneven at low volumes. Other small issues include just having two HDMI ports and a non-Bluetooth remote, which are compromises even for a TV that costs less than Rs. 25,000.

However, the Vu TV makes up for those factors in many ways, including its sharp picture, good motion handling, and a smart TV interface that has no significant drawbacks. This is an easy television to use, getting the basics right and offering a viewing experience that is largely positive.

While you can get the 4K HDR 50-inch Mi TV 4X 50 for just a few thousand rupees more, it might be worth picking up the Vu model for its proficiency in handling the basics, assuming what you need doesn’t go beyond a full-HD 43-inch screen. Alternatively, the Vu 40GA costs a bit less at Rs. 19,499, but we feel it’s better to get the slightly larger 43-inch 43GA variant for just Rs. 3,000 or so more.